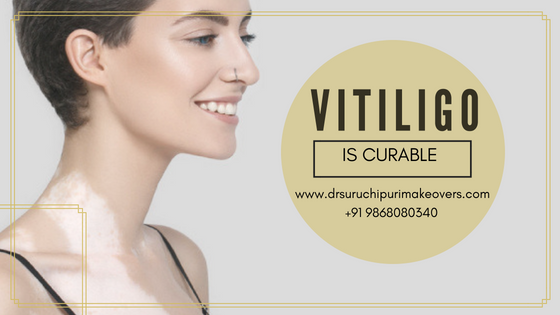 May 31, 2018 Written by DLC_suruchi_puri. Posted in Blog No Comments

Vitiligo is a common skin condition in which the skin loses the pigment milenin that determines its colour. It is also known as leucoderma (leuco = white; derma = skin). Vitiligo is characterised by irregular, pale or milky white patches on the skin. Though vitiligo is not harmful, several misconceptions and social stigma surround this disease, especially in India. Some patients, due to lack of proper knowledge and existing myths around this disease feel embarrassed and avoid going to the doctor. As a result, they deprive themselves of proper treatment.

This post is all about Vitiligo Myths & Facts , we would debunk common myths around vitiligo with actual facts. We hope to give patients of vitiligo the right information about an ailment and encourage them to take an appropriate treatment for it.

There are various myths about the cause of vitiligo. One of the most popular superstitions is that it is a punishment for wrong doing, or something called past karma. Some people also suggest that certain types of deodorants set off vitiligo or that you can get it by patting dogs with white spots on their head!

Notions like these are entirely baseless. They arise from fear or a lack of understanding of the disease. The underlying mechanism which causes vitiligo is loss of melanin, the pigment that determines skin colour. When no pigment is produced, the skin in that area becomes white in colour. This is a well documented biological process, totally unrelated to the nature of one’s behaviour.

Some people believe that vitiligo can be aggravated by consuming milk or other white foods, while few others think that eating sour foods such citrus fruits (lemons, limes and oranges) increase its spread. There is also one particularly prevalent myth that drinking milk shortly after eating fish brings on the disease.

Vitiligo is an auto-immune disease which has no direct relation to food. Therefore, avoiding certain foods will have absolutely no impact on the progression of the condition.

It is often believed that those affected by vitiligo are in some way inferior in their physical or mental capabilities. Many people, due to lack of knowledge about an ailment believe that people with white patches are not intelligent, intellectually disabled or that their bodies are unhealthy and dysfunctional.

Vitiligo is not associated with the degree of one’s intelligence. It does not influence the brain, nor any other part of the body. The effects of vitiligo are restricted exclusively to the skin.

Vitiligo is not contagious, and it cannot be passed through contact. It cannot be transmitted via touch, saliva, blood, inhalation, sexual intercourse or the sharing of personal items (i.e. drink bottle, towels, etc).

Vitiligo is related to other skin disorders such as albinism, skin cancer or leprosy.

There are clear distinctions between each of these disorders, none of them being related to vitiligo. Individuals with albinism are born with little or no melanin, whereas vitiligo onset occurs when melanocytes are damaged. Also, vitiligo rarely encompasses the entire body like albinism.

Skin cancer is a result of mutations in DNA, the genetic information, within skin cells which cause them to behave abnormally and grow uncontrolled. Vitiligo is a completely separate skin disorder, occurring through different mechanisms; it is not a type of cancer.

Leprosy is an infectious disease caused by the bacteria Mycobacterium leprae. If left untreated, it causes skin abscesses and nerve damage which can lead to weakness and gradual loss of function. Vitiligo, on the other hand, is not detrimental beyond the change in skin colour and does not cause any physical impairment.

If You are Suffering from Vitiligo . You can consult us

Dr. Suruchi Puri is a renowned dermatologist and cosmetologist with vast experience in the field of cosmetic, Laser and Bridal Dermatology.

Copyright © 2014-2018 Dr. Suruchi Puri Makeovers. All rights reserved
Disclaimer: The content on this website (www.drsuruchipurimakeovers.com) is solely for the purpose of educating and creating awareness about the domain i.e. Dermatology. This shall not be treated as a substitute to a professional dermatologist's advice or prescription. There is no guarantee of specific results and the results for any treatment mentioned on the website may vary, as every individual and their skin conditions are different.